Day 1: On the road! I cruised through New Hampshire and Massachusetts on route to Rhode Island where I stopped over at Twisted Throttle to pick up a some mounting hardware for the GPS. That night I camped out at a campground that happened to the closed for the season but the nice folks let me tent for free.

Day 2: The fun begins… It’s 40° and raining. Twisting my head side-to-side every 5 minutes allows the visor to be cleared of the rain. In the afternoon the rain picks up and it’s getting difficult to see the road. Small patches of visibility are available from time to time and I’m trying to stay between the lines. I make the executive decision that it’s time to call it quits for the day and I’m not to interested in finding a place to camp in the pouring rain. A motel straight out of a horror movie in the middle of nowhere has a cheap rate and I crash for the night.

Day 3: The rain is still coming down so I swing by a grocery store to pick up some Pledge wipes. Rubbing them on the helmet face shield helps to repel the water and the lemon scent is a bonus. As I hit the road and the temps dropped into the 30’s. Breaking the day into small blocks is the only way to make ground. After 10 miles of riding my fingers are cold. After 20 miles they hurt. At 30 miles I find a place to stop and warm up. After about 7 of these sessions I arrive at my friend Jamie’s house in Maryland.

Day 4: Rest day! It’s Jamie and Laura’s wedding reception and I have a great time hanging out with friends. (Oh and it’s still pouring rain…)

Day 5: The rain has stopped as I head south to the Shenandoah Mountains in western Virginia. Cruising up Skyline Drive is beautiful. I gain elevation quickly and soon enough it’s snowing! I shared a campsite for the night and the temps dropped into the 20’s.

Day 6: The road is still covered in slush and I get cold quickly. Every so often I stop and jog up and down the road to get warm. However, I make it out of the mountains and head over to Virginia Beach for some warmer weather and to catch up with my friend Jon. He’s still working when I arrive so I figure it’s a good time to install the GPS power cord.

Day 7: I follow the coast down to North Carolina’s National Sea Shore. It’s a beautiful ride and my first day without the balaclava under the helmet. Island hopping meant I had to take two ferries. Fortunately, motorcycles get to cut right to the front of the line 🙂 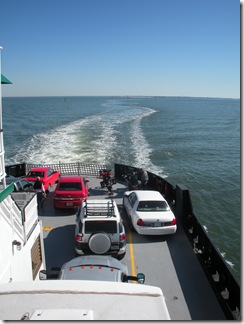 Day 8: Working my way down the coast through Myrtle Beach, South Carolina and it’s 80 degrees! I actually get a little sunburn. It’s hard to imagine that two days ago It was 20° and snowing. I also realize that I’ve never camped in alligator country… I decide to stick to the designated camping grounds, and I find a beautiful spot along the Intercoastal Waterway.

Day 9: Passing through southern Georgia I had to dodge a hot tub in the middle of the road – a good test of road conditions to come. Eventually I reach Florida and stay with my Cousin, Matt, in San Fernando Beach.

Day 10: A biker I met on the ferry recommended that I take highway A1A along Florida’s Atlantic coast. It was a nice cruise and I passed through Daytona Beach and St. Augustine – America’s oldest city where I stopped to check out the Spanish fort, Castillo de San Marcos. I end the day with my Aunt, Uncle, and Nana in Port St. Lucie. A shower, laundry, and delicious dinner are just what I needed.

Day 11: It’s off to the Florida Keys and I can’t stop singing that song… I make it to Key West and to the the southern most point in the continental United States (It counts as continental because we built a dozen bridges from island to island). I share a camping spot at the Bahia Honda State Park and take a dip in the crystal clear water! Ya… this is the life. 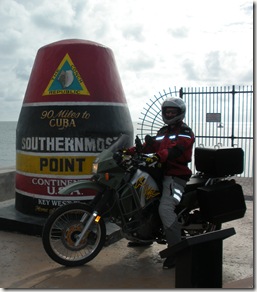 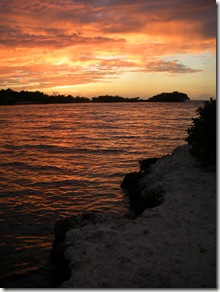 Day 12: Goodbye Florida Keys. Hello Everglades. I head to the national park and do a few short hikes. I haven’t yet seen an alligator and I’m getting anxious. I look everywhere but unfortunately none are to be seen. What’s the deal? I thought these were everywhere? On the way out of the park, I finally get on some dirt roads and I stop by a swamp. Sure enough, I see two alligators! I realized that I don’t know their actions. Will it jump out of the water at me? Will one stare at me and the other come up from behind? Later I find out that they keep to themselves and avoid human contact. Not what I expected from those crazy National Geographic videos. (or was it Jurassic Park?)

Day 13: Headed up the gulf coast and I’m lucky enough to spend the night at a friend’s place in Cape Coral.

Day 14: Still headed up the coast on state highways and the bike is sputtering. Hmm… The first mechanical challenge of the trip. I make it to camp and clean out the carburetor jets. It seems to do the trick. The Micatech pannier doubles as a great mechanics seat too. I see my first armadillo. Again, I wasn’t sure what to expect. I quickly found out that all they do is makes LOTS of noise rustling around the fallen leaves trying to find grubs to eat. The camp spot is under a bunch of Hazelnut (?) trees. These are HUGE and solid and it’s the time of year they fall from the tree. All night I hear them come crashing down. I narrowly escaped a few encounters – that wouldn’t have felt good to have one land on my head. 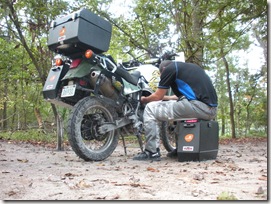 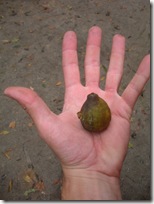 Day 15: Up to Florida’s pan handle and I get caught in a massive downpour. It’s the most severe rain I’ve hit so far. Fortunately the weather was warm and after about 10 miles of not being able to see past my front tire I come across a general store in the middle of nowhere and ride right under their awning. After some nice conversation with the locals and an hour gone by the rain lets up and I continue west.

Day 16: I rolled through Pensacola, Florida and through Alabama’s southern coast on into Mississippi where I meet up with a fellow ADVrider, Paul, who puts me up for the night, feeds me well, takes me kayaking and on a tour of the Hurricane Katrina damage. Here’s a picture of the lot where his house once stood. The water line can be seen on the trees about 12 feet from the ground. It’s hard to fathom what that would be like

Day 18: A rest day in NOLA to hang out with friends and go out for Halloween. I’ve been living on a tight budget (a.k.a. lots of peanut butter sandwiches) so I wasn’t interested in spending money on a Halloween custom. I looked for the only prop I had with me… the inflatable sheep. Here we have Panama Jack, Quail Man, Sheep Fucker, and Twitter. If the city goes this crazy for Halloween, I can only imagine what it’s like at Mardi Gras.

Day 19: Onward to Lake Charles to meet up with another ADVrider, Darrell. After hellos he tells me to take his BMW F800GS for a spin. OK! Darrell and his wife Cher also own a scuba diving shop called True Blue Watersports.

Day 20: Houston, Texas to meet up with yet another ADVrider, Dave, who rode his motorcycle from Texas to Tierra del Fuego last year. It was great to pick his brain for all kinds of information. It’s here that I started to get scared and excited all at once! Dave was even robbed at gunpoint by banditos in Guatemala… But overall he had great things to say about the journey. 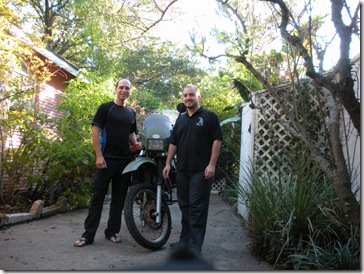 Day 21: I decided to stay another day in Houston to get some last minute paperwork organized. I made laminated copies of all my important documents. I’ll hand these over to officials and not the originals just incase anyone tries to bribe me to get them back. A run, some frisbee with Dave’s dog, Indy, and delicious Texas BBQ wrapped up the day.

Day 22: Austin, Texas with the hopes of running into Lance Armstrong at his bike shop, Mellow Johnny’s. No lance sightings unfortunately but I did have a chance to meet up with, yup you guessed it, ADVrider Robin and hangout with the local moto crew at the pub downtown.

Day 23: The butterflies are everywhere in Texas and several of them met my helmet with a loud SMACK. Eventually I made it down to a state park in Laredo, Texas. Another run in the dry heat felt great and I organized my documents for tomorrow’s border crossing. 4,500 miles have gone by since I left home. Another 16,000 or so still to come 🙂

Day 24: MEXICO!!! I packed up early in order to get through the border quickly. Dave recommended a quiet border crossing about 25 miles north of town. (Headed to Mexico? Here’s the details). I had a nice chat with the lady on the USA side of the border then rode across the bridge to Mexico. Instantly no one spoke English and none of the signs were in English. It was fun trying to talk Spanish to officials to get my passport stamp, tourist visa, and vehicle import permit. No one seemed to be in a rush. At one window there was no one present and no one I asked seemed to know when the official would be back… After 15 minutes the official arrived. Life’s a little slower south of the border… The driving rules changed too. All of a sudden it’s accepted and expected to drive on the shoulder, pass by going into the oncoming traffic’s lane and stop wherever you please. It’s been flat for the last 3,000 miles and finally I got into the mountains! I made a straight 200 mile shot through a few towns and arrived at Hidalgo outside Monterrey at La Posada in El Potrero Chico. I rock climbed here a few years ago and decided that it would be a great place to take a few days off the bike, slow life down, get used to Latin culture, and get organized. So I’m here now and eating delicious tacos. mmmmmm. 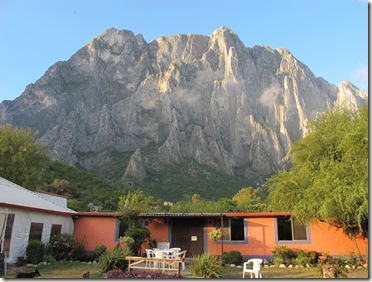 6 thoughts on “The United States”