After leaving the quiet mining town of Real de Catorce I passed the Tropic of Cancer and onto San Miguel de Allende. The town boasts about 10,000 expats who come to enjoy the beautiful colonial architecture and year-round mild climate.

I met two Polish travelers who are hitchhiking around the world and using CouchSurfing to find places to stay along the way. I decided to give it a shot and met up with Michael who is a retired American now living in San Miguel. He has an awesome condo just outside the hustle and bustle of downtown that’s located next to a local market.

Walking around this beautiful town I was drawn to the plethora of doors. I started a little photography project to find and photograph interesting doors in San Miguel. Here are a few: 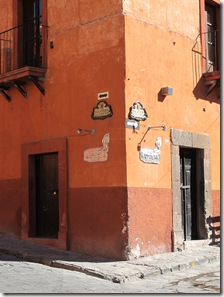 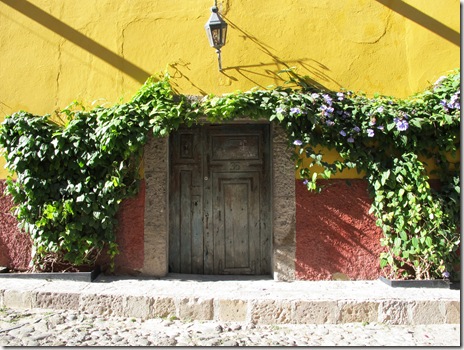 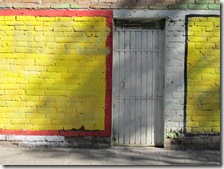 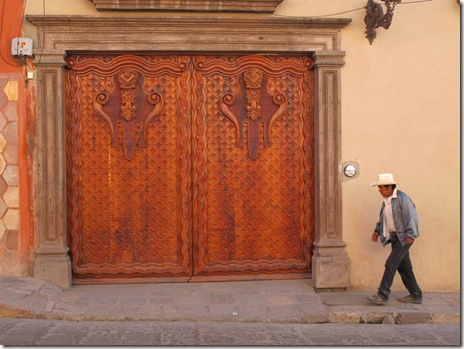 By the time I reached San Miguel I had ridden my bike over 5,300 miles! It was time for an oil change. I emailed the owner of Motos y Mas, Alberto. He let me know that they were on holiday but he offered to come in nonetheless. We changed the oil and filter, added a small inline fuel filter (I’ve already had to clean out the jets twice…), fixed the broken turn signal wiring, and tightened the shifter. Alberto also leads group rides for MotoDiscovery and is headed down to Ushuaia in a few months. I mentioned that I had seen numerous KLR’s around San Miguel. It turns out that Alberto imports them. If you’re in San Miguel on a bike, be sure to check in with Alberto.

By the time I left Alberto’s shop it was noon and I had 230 mountainous miles to ride before the next stop, Xilitla (pronounced hey-leet-la). The roads were beautiful; lots of twisties up and down through the mountains. I realized I couldn’t let my guard down after I saw a few folks passing on blind corners…  The dry desert eventually changed to luscious green cloud forest at about 8,000 feet with fog so thick that I could barely see 10 feet in front of the bike. It was spectacular scenery but unfortunately, I only stopped once in the mountains to grab a photo. 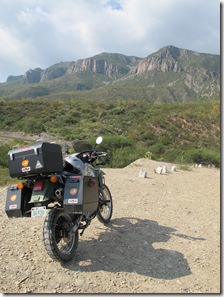 Before entering Mexico I was given three pieces of advice from friends:

I was concerned that my shadow was getting longer and I still had many miles to ride. I kept on, driving perhaps a little too fast through the mountains, passing trucks and buses when the coast was clear. Coming around a corner, without any warning, the road was under construction and the smooth pavement immediately turned to gravel. I struggled to reduce my speed and remain in control as I eased on the brakes. Phew… that woke me up. Shortly there after the sun had dropped behind the mountains and a light rain had started. Finally, I arrived at Xilitla as night set in. I quickly found a hotel to get out of the rain and get some rest.

By the next morning the rain had stopped and I went to visit the the main attraction – Las Pozas (The Pools/Wells). This interesting place was created by the imagination (and wealth) of the surrealist Englishman, Edward James. Although it looks like ancient Mayan ruins, in fact it was built only 5 decades ago. I enjoyed walking around the funky creations (that lack handrails – try that in the US!) where the jungle has begun to take back its land. Although it was very creative, I found it hard to connect to these “ruins” as they aren’t ruins that were constructed by an ancient civilization.

I’ll be back on the road in the morning for another full days ride. Cheers.