My friend, Charlie, has been following the journey with a map he keeps updated on his desk at work. Thanks for the support, Charlie!

Shortly after crossing the border I’m able to see the tallest mountain in South America, Aconcagua 6962 m (22,841 ft). I thought about climbing it, but then I thought better of it and just took a picture.

A few more kilometers down the road and I find the migracion and aduanas office. It’s the first border crossing that resembles order and logic. It still takes a while, but it’s all good.

And a few more kilometers down the road I come across this truck that’s flipped over and halfway off the road.

A bit further down and it’s the shrine for the local saint, Difunta Correa. Legend has it that she travelled through the country during the civil war in the 1850s and died of thirst. When local villagers discovered her body they were amazed to see her baby son was still alive. He survived by suckling on her breast and living off her milk. This miracle prompted a shrine. People now present her with offerings of water bottles and it’s told that she protects travelers on these barren roads. 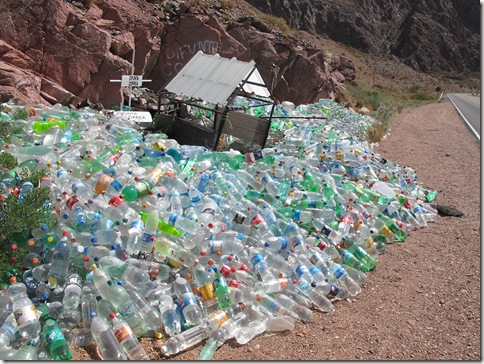 As I get closer to Mendoza I pass through the wine region. Lots of grape vines.

I really enjoyed my stay in Mendoza. It’s a beautiful and lively city and everyone is using the word “vos” down here. It’s the informal form of you in Argentina. Other Latin American countries use “tu” instead.

Leaving Mendoza I head south on the (in)famous Ruta 40 for Malargue. As I get closer to Malargue the wind picks up. It’s very windy in the town and the next morning as I’m making my way out of town, down the main road that has 3 poorly visible traffic lights, I get in an accident! I can’t be certain, but I’m pretty sure I ran a red light. The traffic lights were poorly angled and near impossible to tell the color. Regardless, I should have been paying more attention and driving more defensively.

The accident was like slow motion and fast forward all at once. I entered the intersection and suddenly noticed a car coming from my side. I slammed on the brakes and skidded. The car did the same (unfortunately, had he kept his normal speed there would have been no collision). I crashed my front end into his rear panel. Somehow I high-sided, fell off the bike, and rolled down the street. By the time we collided I wasn’t going very fast and fortunately I wasn’t hurt (neither were the driver or passenger of the car). There was a loud crunching sound as we met and then my bike lay in the middle of the road. The driver came out yelling but quickly calmed down and helped me pick up the bike and move it off the road. I took an inventory of the bike and noticed the mirrors were bent (easy fix) and that the front plastic cowl was broken (bummer, but OK).

The first thought in my mind is that I’m going to prison in Argentina. I then rationalized my thoughts and realized that I didn’t have insurance. OK, so the cops and driver are going to get me for a big bribe. OK, a potential loss of $500 is bad but not the end of the world. I calm down and apologize to the driver. The first thing he says to me is that we don’t need the police. Huh? We’re both pretty sure I broke the law and I’m at fault. There’s a fair size dent in his rear panel and he doesn’t want the cops involved??? He must be hiding something… but I’m not going to argue because this really works out in my favor. He doesn’t even ask for any money. He tells me to drive more carefully and we’re on our way. I’m not going to wait around while he changes his mind so I hit the road. The windscreen is flapping in the wind the whole way. Stupid Stupid Stupid. I got lazy. I’m lucky I didn’t get seriously injured. Time to focus more on the road. 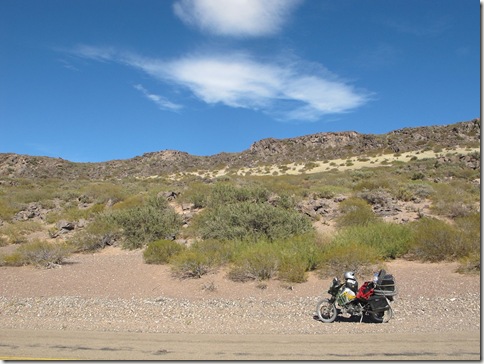 I push on for about 9 hours and finally arrive in Zapala for the night. After riding such a long day I get some dinner and pass out. The next day it’s more of the same scenery and little traffic. There’s a lot of land down here and it’s sparsely populated every few hundred kilometers. Looks like I still have a long way to go.

The landscape starts to change around Bariloche and it’s really spectacular country filled with large rock formations and big beautiful blue lakes. It’s a pleasant change from the more barren land up north. 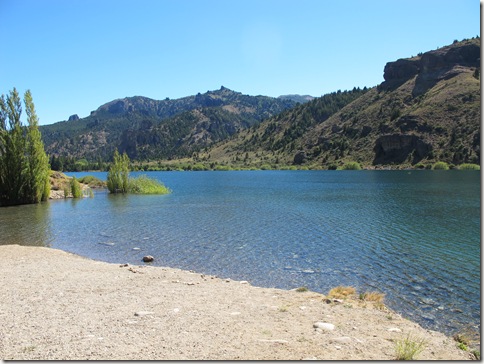 Bariloche is beautiful town beside a serene lake. I popped into a mechanics shop (ya, I do that a lot) and they helped me fix a few things (there’s always something needing fixing). My free brake pads from the shop in Chile turned out to be junk. The backing on them was so thin that it somehow bent and separated from the braking pad. So that’s why my brakes suck… OK, I bought some new pads (front and rear) and they helped fixed my front plastics. Some diamond plate and pop-rivets. Beautiful!

After leaving Bariloche, I ride through a few miles  of bumble bees. THWACK! It’s loud when these guys hit the helmet. And of course one hits my neck and goes down my shirt. I feel it squirming on my skin. I pull over and tear off all my layers to finally get him out.

When I stop for a snack a few hours later I see that right rear blinker has been lowered and is now being melted by the exhaust. There’s always something, isn’t there….

I arrive in Esquel in the late afternoon. It’s time to change my tires (again) to prepare for the off-road riding on the Carretera Austral in Chile. There’s always a tire changing place in Latin America. In Mexico and most of Central America they were called Vulcanizadora (or Vulka). In most of northern Central America they are called Llanterias and in Argentina they are called Gomerias. Whatever their name you can find them by the signature giant tractor/truck tire in front of their building. 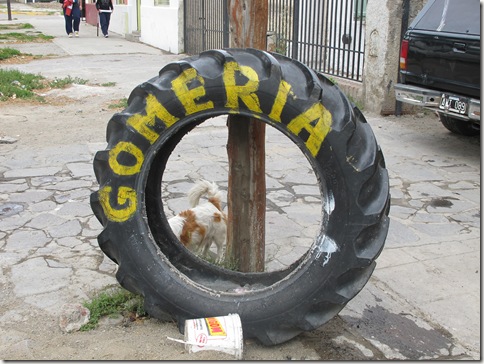 The asphalt stops in Trevelin and it’s gravel all the way to the border. It’s another quiet frontera. I’m first in line and pass through with ease. There’s also lots of European trucks on this road. Those you see in the picture below are the smallest. Most are giant lorries.

Up next, back to Chile to ride the Carretera Austral. Stay tuned!