Awww, Mexico… I spent a few days relaxing and rock climbing in El Potrero Chico. It’s a beautiful place with stunning limestone mountains that attract rock climbers from around the globe to climb the bolted multipitch routes. It felt great to take a few days off the bike and get rejuvenated for some more riding.

I was able to borrow some gear and get some climbing in. I’m in the left photo and if you look closely in the right photo you can see Matt sending in the Virgin Canyon. 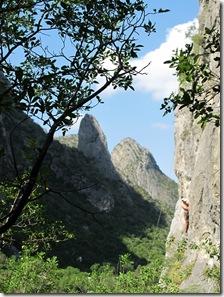 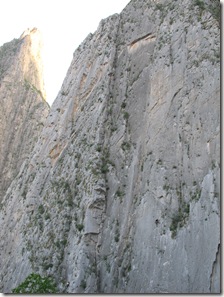 The author of The Whole Enchilada guide book, Dane, showed me to a cobbler in town who was able to sew loops onto my boots. I’ll use these loops to lock up my boots.

After dinner all the climbers get a little restless. We had speed rope-coiling contests and an elevated tug of war showdown. Here’s Blake and April getting serious.

It was a wonderful few days in the Potrero but I was anxious to hit the road. I left town for a short ride to Monterrey. Mexico’s third largest city.

I stayed at a hostel in the Barrio Antiguo (old neighborhood). Oddly enough the owner of the hostel had lived in Bedford, NH – what a small world! The only secured parking was a lot down the street. I negotiated from 100 pesos to 50 pesos arguing that my bike was so small. It worked. I walked for miles around the city, had some delicious street tacos, and stumbled into the Northeastern Mexico History Museum (that happened to be free for the month of November). I even went to dinner with a Mexican Lawyer; you never know when that connection could be useful… 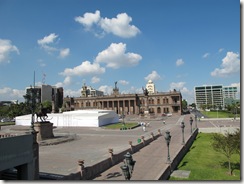 The city was nice but I was ready for some new roads and cheaper living. The next morning I set sail for a full day or riding. Heading west through Saltillo and then south I gained altitude quickly. A construction road block halted traffic for nearly an hour. I tried to get permission to go by on my bike but to no avail. It gave me a chance to get some warmer clothes on though as the ride through the altiplano continued.

About 200 miles later that day I reached the road to Real de Catorce. Heading up to this old silver mining town was a challenge as the only road was made from cobble stone over a century ago. It was a bumpy 15 miles long (or 25 kilometers – I’m not really sure how many kilo-joules per fortnight that is though). You can’t fathom just how long 15 miles is when riding this road… Eventually I reached a 2 mile long, one lane tunnel that winds through the mountain to arrive at the town. I didn’t see any ventilation ducts in the 100 year old tunnel though.

The movie, The Mexican, was filmed in the town. I found a cozy little motel. For 150 pesos I have my own room, bathroom and shower, with an open air courtyard and crazy twisting staircases. The gentle sounds of donkeys, roosters, and barking dogs ease me to sleep. 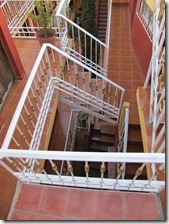 Up here at about 9,000 ft it’s a dry mountain environment. When the sun goes down the temps drop quickly and at night it’s VERY cold. There’s lots of little shops that sell trinkets and a beautiful church that was originally constructed in the 18th century. 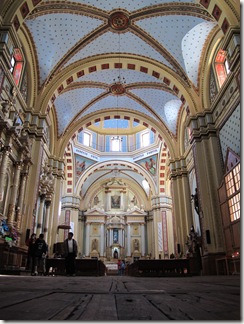 In the morning I went to the roof of the hotel to get some sunlight and make breakfast (oatmeal & fruit) in the Jetboil PCS Flash.

I went for a nice hike up one of the mountains following what used to be “the road into town" before the tunnel was built. It yielded great views of the town from above and an old ghost town up high on the mountain. 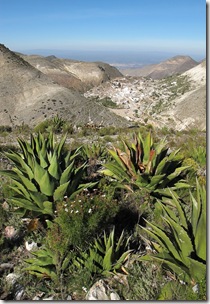 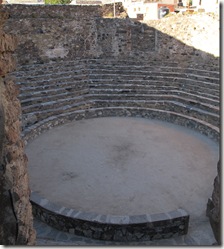